How to change the registered keeper of your car

It’s estimated that most people own somewhere between four to six cars over the course of their adult lifetime, which means that changing the registered keeper of your car is very much like scrapping your car, in that it’s one of those jobs that you’ll probably end up finding you have to do eventually. And while the idea of sorting out paperwork probably doesn’t seem that thrilling – we know it’s something we try and save you a lot of here at Scrap Car Network – the good news is that it’s arguably simpler to do these days than it’s ever been, and 9.5 million of them happen every year in the UK alone. Here’s what’s involved!

OK, so one of the most important bits of information we should start with is to say that changing the registered keeper of a car is not the same thing as changing the owner, as there are subtle but significant differences between the two.

In the UK, the official keeper of the vehicle is named on the V5C vehicle registration document. It’s usually the same person as the owner, but not necessarily. For a teenager’s first car for example, it’s not too rare for the young driver to be the car’s registered keeper, but with their parent acting as the actual owner.

Obviously, most adult drivers generally act as both the owner and registered keeper. If you’ve recently sold your car, it’s worth taking a moment to ensure that you’re no longer legally considered the registered keeper of the car, so that you’re not held responsible for anything else it’s used for. This way, you don’t have to worry about, for example, parking fines being issued in your name, or even getting visits from authorities investigating serious criminal wrongdoing. (That’s also one of the reasons why it’s so important to get a Certificate of Destruction when you finally scrap your car,)

Make sure you always have the V5C certificate

Any vehicle being sold should always be accompanied with a V5C certificate or logbook. It’s also known as the vehicle registration document, which is a slightly less misleading term than ‘logbook’ as it’s not a book at all, but a red paper document. (In the case of some older cars, it may even be blue, but the vast majority in circulation are red.)

As we’ve touched on above, the V5C names the registered keeper, not the owner. When the car is sold, the current registered keeper is legally required to formally notify the DVLA of the transfer, so that the organisation can correctly identify the new keeper.

You can do this via post, or on the DVLA website. To be honest, the online option tends to be a lot faster, but the post option is always a handy backup for those who’d prefer not to use the online service for whatever reason. 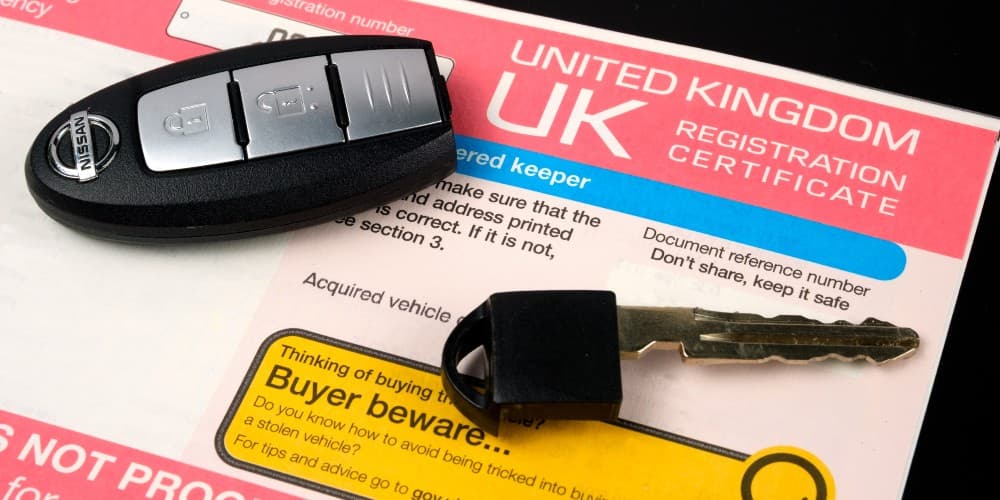 Changing the registered keeper in a private sale

If you’re selling your car privately, then the registered keeper needs to be transferred promptly. To briefly reiterate, if you’re the one selling your car, then you’ll need the V5C. Without the correct paperwork, you’ll probably find that no private buyer will touch your car with a barge pole. (Related question: What happens if I lose my V5C?)

Once you’ve got your V5C to hand, the new keeper will then need to complete Section 6 of the certificate. This is known as a V5 transfer.

Again, you may find that the new keeper prefers to do the entire process online, but if you’ve both agreed to do it by post, then you’ll need to check the New Keeper box on the V5C, and add the details of the new keeper. After that, you’ll just need to both sign and date it before sending it off. The new keeper then just needs to complete the green slip on Section 10 (that’s known as the V5C/2) and then keep hold of that until they receive their new V5C through the post.

Changing the registered keeper to a dealer

This is even more simple. Both parties simply need to sign Section 9 of the V5C certificate, known by the catchy moniker of V5C/3. After that, the dealer will then assume possession of the car. They’ll then notify the DVLA, and the seller will receive an acknowledgement. If you’re scrapping your car, that acknowledgement will take the form of a Certificate of Destruction.

The official advice is to use the online service to cancel your car tax as soon as you’ve handed over the car, as there’s no guarantee the garage will get round to doing it immediately, and every day that transpires before the DVLA receive the paperwork is another day that’s costing you money. In fact, on that note, we should address another common question we often hear at Scrap Car Network.

Will my car tax be transferred?

In a word: no. You can’t transfer vehicle tax to a new owner –which can be good or bad news, depending on who you’re transferring to. Therefore if you’re selling your car, the DVLA will transfer how much remaining vehicle tax you owe from the day it receives your letter. It will then refund you the balance.

As for the new keeper, they’ll need to bear in mind that from that moment on, the car is untaxed, so as soon as possible after the sale they should either move to tax the car, or apply for a SORN from the DVLA under the name of the new keeper. This is why it’s important to make sure that the car is taxed or taken off the road on the day it’s been sold, either by doing so online or taking the relevant paperwork into a Post Office capable of filing car tax applications.

When you scrap your car with us, of course, we make the entire process as easy as possible – just like we like to do with everything else here at Scrap Car Network! All you need to do is enter your car reg and postcode into the fields on our website, and before you know it you’ll be looking at your very own instant scrap car quote.

If you decide to proceed, the next step is to let us know exactly where and when to come and collect your car. When we arrive, we’ll briefly sort the V5C with you, and then once everything is signed and sorted we’ll take the car off your hands, and finalise the payment on the same day! Lovely jubbly.

Curious to see how much your car is worth?